Márta Ábrahám is a Hunga 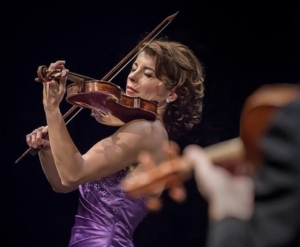 rian violinist performing and teaching extensively around the world. She is the founder and leader of Ábrahám Consort baroque music ensemble, professor (DLA)  at the Franz Liszt Academy of Music, Budapest.

Since 2005, she is a violin professor at the Liszt Ferenc Academy of Music, Budapest, in 2013 she gained her DLA degree. She gives masterclasses in Hungary, Israel, The Netherlands and other countries. In 2009 she founded the summer camp “Zebegény Workshop for violin soloist and chamber music” which is held every summer in the picturesque village Zebegény, along the Danube.

Since 2011 Marta Ábraham – together with composer Barnabás Dukay – is intensively researching the music of Johann Sebastian Bach. Their attention focuses mainly on the violin works, most specifically of the Six Solosonatas and Partitas. Their aim is to investigate and analyze these work fills a gap not only in national, but also in international context. Numerous lectures, presentations and concerts were held, at the Liszt Academy of Music, FUGA, Doctoral School of the Architectural Association, Jerusalem Academy of Music and Dance.